Vaccine Debate Over: Vaccines Save Lives

Posted on February 5, 2015 by Commander in Chief At home

The title of this piece seems to state the obvious, right?  So why are the numbers of anti-vaxxers increasing?

There is no dispute over the fact that vaccines save lives.  The inoculations developed and used over the past 40+ years had practically eradicated life altering, disfiguring and often fatal, diseases.  Some kids cannot get vaccinated, the herd immunity effect helps to protect those kids, as well as those for whom the vaccine was not effective.  So why, in recent years, have the numbers of parents who vaccinate their kids dropped? Because anti-vaxxers think the risk of getting one of these now rare diseases outweighs the risk of having their child be injured by the shot meant to keep the illnesses at bay.  I see their point.  I’ve met families with kids who had terrible reactions and are permanently, severely, disabled.  These tragedies are rare, but tell that to a family affected by one of these occurrences and you’ll get a big reaction.  I often hear people trying to help parts of the community, saying, “If I save one life because of my actions, it will be worth it.”  So, how do you tell a family whose once healthy child is forever maimed that their one child is less significant than another? You can’t.

The fear of vaccines, though, does not seem to be about these rare events.  The idea that vaccines “cause” autism is still real amongst many communities and I hear this quoted as a reason to not vaccinate.

I am the mother of a child affected by autism.  While this does not, in any way, make me an expert in the vax or anti-vax world, I do feel it gives me a bit of credibility in speaking to the issue.

Many elements of this debate upset me.  I love my autistic son.  I loved him before his brain started making some things harder for him and I love him just as much now; but when I hear other autism parents say that they wouldn’t change their kid if they had the chance, or that they believe their child is exactly who he/she was meant to be, my heart flips.  I don’t get it.  Why would anyone want their child to struggle if they could prevent it?  I repeat, I love my autistic son as much today as the day he was born, and I adore the person he has become at age 16, but if there was any way at all that I could make his life easier for him, I would… without hesitation.

Do toxins cause autism? Is it genetic?  Is it a reaction in the gut that starts the process?  Is it injury during labor and delivery?  Does a change take place in the womb?

I’ll say it again, because my biggest peeve related this issue is when I hear people say that X (fill in blank) does not cause autism.  The fact is, we don’t know what causes it.

Good scientific research indicates that autism may be caused by a mix of genetic and environmental factors.  This makes sense to me, but the details are not clear.

So, how do I reconcile all of these conflicting forces of thought?

I 100% vaccinate my children in order to inoculate them against the harmful diseases the vaccinations protect us from, but I do not subject my children to more than one injection at each doctor’s visit.  There is no dispute that vaccines cause changes to our children’s bodies.  That’s the point.  What we don’t understand, though, is could there be unwanted effects if the immune systems of some more fragile kids are bombarded with too many toxins at a time?  Do the toxins build up in some children’s bodies?  It’s a tough question that is yet to be answered.

The cost of the extra, vaccine only, office visit is worth the peace of mind I get from taking a bit of precaution when it comes to the well being of my children.  My eldest son was vaccinated on the regular schedule, but my other three, born after their older brother stopped talking at the age of 13 months, had a more conservative vaccine schedule, slightly spread out, but close to on-time; and all were fully vaccinated by the time they entered school. 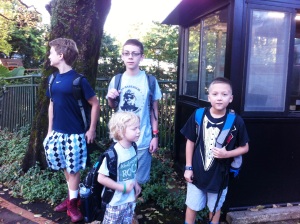 I hear the chatter on tv, online and in the papers.  I know there are strong opinions on both sides of this public health issue.  I know my path is different than most, but in my opinion, it was the right way to go for our family.  And, other than the scientific fact that vaccines help to prevent the spread of many terrible diseases, there are not facts to say what does, or does not, cause changes in our kids, only speculation and circumstantial anecdotes.

I’m ok with that for now.  I know that people, who are smarter than I, are scientifically studying autism and might figure it out some day.

I’m not ok with other people thinking that not vaccinating their kid at all, in order to prevent a possible consequence, is ok.  Anti-vaxxers are counting on my kids and others to shield their kids from exposure via herd immunity.  It doesn’t work when more and more people are going un-vaccinated, and the tactic is leading to illness and death from preventable illnesses.

This is an undisputed scientific fact.

The rest is pure speculation.

About Commander in Chief At home

39 Responses to Vaccine Debate Over: Vaccines Save Lives

I'd love to hear how you feel about this. Leave a Comment Cancel reply